The suspects were detained in the lockup cell of the Santa Barbara police station, facing charges./PN 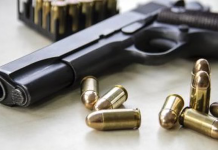