MANILA – Three Western Visayas-based players have been named part of the 16-woman national volleyball team in the Southeast Asian Grand Prix from Sept. 20 to 22 in Nakhon Ratchasima, Thailand.

Guimaras native Jovelyn Gonzaga and Ilonggas Abigail Marano and Aiza Maizo-Pontillas formed part of the national team that will also be used for the Southeast Asian Games in Manila later this year.

Gonzaga, who was returning to the national squad after missing the entire 2018 season due to an ACL tear in her knee, said she was grateful to be a part of the team. 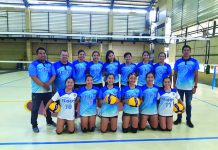