BACOLOD City – The construction of a new sanitary landfill (Cell No. 2) in Barangay Felisa will be extended for four months.

This was finalized after the Sangguniang Panlungsod concurred to authorize Mayor Evelio Leonardia to grant the project contractor’s request for extension until Aug. 30.

The landfill project has a P49,810,444.25 budget. Its construction started in November 2018 and is supposed to be completed this month.

But the IPM Construction and Development Corp. – the project contractor – said in a December 2018 letter addressed to Leonardia that it cannot finish the construction by April 30.

Isabelita Mercado, IPM’s president, said they have difficulty in excavating the area where the new landfill is set to operate.

IPM requested to transfer the project to another area within Barangay Felisa, near the original site.

“Upon the recommendation of the Solid Waste Management Board and as per checking and evaluation conducted by the technical personnel of the City Engineering Office, we are offering a new modified plan and design of the project,” read part of Mercado’s letter.

She added that the modification of the project will entail an additional cost of P1,747,406.85, which their company will shoulder./PN 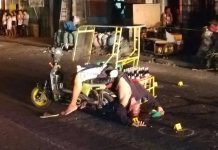