The drug-clearing operation is the offshoot of a memorandum of agreement between BJMP and PDEA to intensify their antidrug campaign in municipal and city jails.

No illegal drugs and paraphernalia were confiscated during the separate search and seizure operations from May 3 to 6 in jail facilities in the region.

The searching teams were assisted by drug-sniffing dogs and personnel from the Philippine National Police.

Around 700 persons deprived with liberty – who submitted their urine samples –also tested negative during the random drug tests.

In Aklan, operatives randomly conducted a drug test on 40 out of 197 inmates in Aklan District Jail male and female dormitories in Barangay Nalook, Kalibo on May 6.

On same day, the greyhound team also inspected the Roxas City Jail in Barangay San Jose, Roxas City, Capiz and subjected 58 out of 280 inmates in the random drug test.

On May 4, 378 persons were subjected to a random drug test at the Iloilo District Jail female and male dormitories in Pototan, Iloilo.

PDEA also conducted a random drug test on 200 out of 983 inmates in the Iloilo City District Jail male dormitory in Barangay Ungka, Jaro, Iloilo City on May 3. (With Akean Forum/PN) 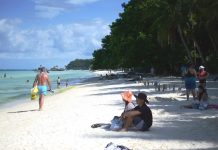