MEXICO City – Three asylum seekers due to be returned to Mexico after appearing in U.S. immigration court on Tuesday asked officials to let them stay in the United States because they feared for their safety while waiting out the process in Mexico.

The requests are a new approach by migrants in response to President Donald Trump’s recent policy that requires people seeking protection in the United States to wait for their U.S. court dates in Mexican border towns, part of his hard line stance to halt migration.

Some 240 people – including families – have been returned to Mexico since late January under the program, dubbed Migrant Protection Protocols (MPP), according to U.S. officials.

Six Central American migrants who crossed from Tijuana through the San Ysidro port of entry had their cases heard at a San Diego courthouse in the program’s first day of hearings on Tuesday. All were told to return to Mexico.

Robyn Barnard, a lawyer from the nonprofit group Human Rights First, said she asked officials to let her two Honduran clients stay in the United States. Both are afraid of returning to Tijuana to wait for their next hearings in early August. (Reuters) 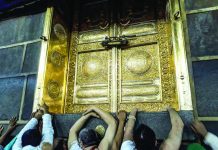