BACOLOD City – The Central Negros Electric Cooperative (Ceneco) will ensure reliable power supply during the conduct of the barangay and Sangguniang Kabataan elections this May 14.

Ceneco president Roy Cordova said they will form a group that will be tasked to make sure that no power problem will occur come election day.

The plans will be finalized during Ceneco’s regular board meeting on May 7, Cordova added.

“We want to assure a reliable and steady supply of power in the coverage areas of Ceneco,that is why we will create a task force,” he stressed.

Meanwhile, Ceneco will implement an upward power rate adjustment for its April billing.

The rate increase will affect all Ceneco consumers except those who have been its members since April 2010.

The Energy Regulatory Commission(ERC) approved the additional fee through an order dated June 20, 2017.

Another power rate increase of P0.0817 per kW-h will be imposed to all member-consumers for 50 months starting April to pay Ceneco’s debt to Kepco-Salcon Power Corp.

The ERC also approved such rate increase through its case decision No. 2013-141RC.

Ceneco supplies power to the cities of Silay, Talisay, Bacolod, and Bago and municipalities of Murcia and Salvador Benedicto./PN 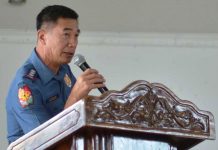