MANILA – Che’lu Bar and Grill Revellers overhauled a double-digit deficit to score a 77-72 victory over Family Mart-Enderun in the 2019 PBA D-League on Monday at the JCSGO Gym in Cubao, Quezon City.

Down by as much as 15 points, the Revellers leaned on its defense to slowly claw its way back to tie the count at 72-all. A triple by Jeff Viernes and two free throws by Jesse Collado completed Che’lu’s come-from-behind win.

Viernes finished the match with 13 points, five rebounds, and five assists for the Revellers, which remained in the hunt on twice-to-beat edge in the Aspirants Group with its 6-3 win-loss slate.

Alfred Batino led his side with a double-double in the tune of 14 points and 17 rebounds, while incoming University of the East Red Warriors rookie Rey Suerte got 13 points and four boards for the Revellers.

Dave Ildefonso guided his side to the victory with 20 points, six rebounds, and three assists, while John Lloyd Clemente contributed 16 points and four boards to finish with 4-5 win-loss slate./PN 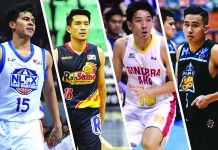