Japeth Aguilar led the way with 20 points, while Gregory Slaughter and Kevin Ferrer added 17 and 14 markers, respectively, for the Kings, which improved to 3-2 win-loss slate.

Earl Scottie Thompson also had an inspiring game infront of his fellow Davaoenos as he submitted 16 points, 11 rebounds and six assists for the Kings.

The Kings struggled early and were down 6-10 before coming up with a huge run behind Slaughter, Jeffrei Chan and Ferrer to take a 22-12 lead on a buzzer-beater by Arthur dela Cruz.

The Elite come to within five early in the second period but consecutive three-point hits from Thompson followed by inside conversions from Aguilar to build a 44-28 halftime edge.

The Elite threatened again in the third canto to cut the deficit to 13 points but the Kings relied on baskets from Thompson, Slaughter and Ferrer to pull away for good.

“I always tell my players to control the things you can control. We cannot control the schedule so we have to deal with the best we can by winning our matches on the road,” said Kings head coach Tim Cone.

Michael Digregorio and Joseph Eriobu had 14 points each, while rookie Abu Tratter added 13 markers for the Elite, which dropped to 1-6 slate./PN 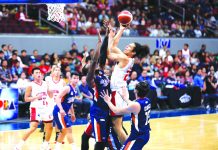 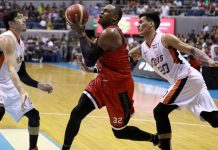 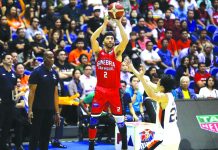