NADINE Lustre looked stunning as she arrived at this year’s Asian Academy Creative Awards (AACA) in Singapore on Friday.

Lustre, who was in the running for the AACA’s overall best actress award after winning the regional category, oozed glamour in a plunging silver Michael Leyva dress.

Lustre was named the Philippines’ best actress by the AACA for her performance in the movie “Ulan.” She, however, lost in the overall category to India’s Shefali Shah.

She was joined on the red carpet by Dimples Romana, who got the nod for Best Supporting Role for “Kadenang Ginto.”

Lustre’s “Ulan” co-star Carlo Aquino, director Irene Villamor, and Tirso Cruz III (“The General’s Daughter”) were also unsuccessful in taking home the overall awards in their respective categories, after being named the best in the Philippines.

The AACA gala night was held at Singapore’s Victoria Theater.

The academy aims to celebrate the best in Asian content – ranging from film to online – and to promote them internationally. (ABS-CBN) 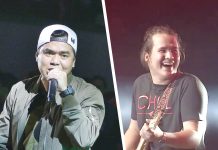