MANILA – Jericho Cruz capped NLEX Road Warriors’ fight back from 28 points down with a go-ahead triple to subdue Barangay Ginebra San Miguel Kings in overtime, 113-111, in the 2019 PBA Governors’ Cup on Sunday at the Coca-Cola Arena in Dubai, UAE.

With his team down 110-111, the Ilonggo guard drained a go-ahead triple to give the Road Warriors the 113-111 lead with 20 seconds left. The Kings then fumbled thrice in the next possession as NLEX completed its come-from-behind triumph.

The Road Warriors improved to a4-1 slate.

Trailing 41-69 at the onset of the third period, the Road Warriors slowly clawed its way back into the match behind baskets from Ashaolu, Erram, Paniamogan, and Kiefer Ravena to cut the deficit to 94-97.

After the Kings extended the lead to 100-94, the Road Warriors tied it at 100-all on triples by Erram and Paniamogan. Ginebra took a 103-100 lead on free throws by Justin Brownlee and Japeth Aguilar but Ravena send the game to OT with a triple.

Ginebra took the upper hand in the extension period at 111-107 before the Road Warriors hoisted back-to-back triples in the final minute behind Paniamogan and Cruz to take the lead for good.

Brownlee finished with triple-double of 42 points, 20 rebounds and 10 assists, while Gregory Slaughter and Stanley Pringle submitted 19 markers each as the Kings dropped to 1-2.

From a 73-all count, the Hotshots went on a huge rally behind Ian Sangalang and Jiovani Jalalon for a 90-83 edge.

The Aces made its last push to come to as close as 90-94 before Magnolia tightened its defense to escape with the win.

The Hotshots improved to 3-1.

Vic Manuel finished with 22 points as the Aces skidded to 0-5.

In the other match, Meralco Bolts walloped Phoenix Pulse Fuel Masters, 111-94. Allen Durham had double-double 27 points and 12 rebounds as Chris Newsome tallied triple-double 13 points, 12 rebounds and 11 assists as the Bolts rises to 3-1./PN 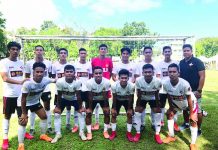 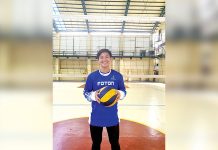