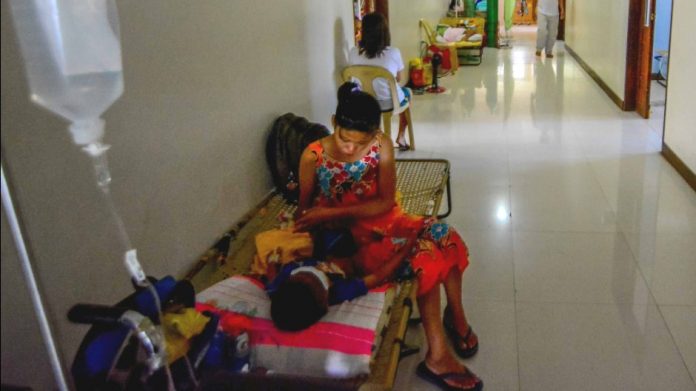 ILOILO – People have been rushing to rural health units and the provincial government’s 12 hospitals for dengue tests to know if they have the dengue virus, resulting to a shortage in dengue test kits.

The Provincial Health Office (PHO) has recorded 1,371 more dengue cases in a week even as the provincial government expands its barangay-based cleanup drive to get rid of clear, stagnant water where dengue mosquitoes breed.

In a letter to Health secretary Francisco Duque, Defensor asked for 550 boxes of dengue test kits. Each box contains 25 sets of kits.

The Aedes egypti and Aedes albopictus mosquitoes are the main vectors that transmit the viruses that cause dengue. The viruses are passed on to humans through the bites of an infective female Aedes mosquito, which mainly acquires the virus while feeding on the blood of an infected person.

Even at its early stages, the dengue virus can be detected by the dengue rapid diagnostic test kit.

The kit contains a finger pricker to draw blood and promises results in minutes.

Like a pregnancy test kit, two lines will appear if the blood is positive for dengue, and one if it’s negative.

“Our request for the needed medicines and supplies are projected to last for three months based on current data,” read part of Defensor’s letter to Duque.

The current dengue cases are 998 percent higher than the 620 cases with three deaths recorded from January to July 2018.

According to the World Health Organization (WHO), once infected, humans become the main carriers and multipliers of the dengue virus, serving as a source of the virus for uninfected mosquitoes.

The virus circulates in the blood of an infected person for two to seven days, at approximately the same time that the person develops a fever.

Symptoms of dengue include fever, vomiting, stomachache, difficulty in breathing, bloated belly, restlessness, and bleeding of nose and gums.

Data from the provincial government’s Hospital Management Office showed that as of July 18 the number of patients confined in 11 district hospitals and one provincial hospital already reached 2,156 and 1,148 of these were dengue cases.

To date, these were the five areas with the most number of dengue cases and deaths, according to the PHO: