Pacquiao, the current WBA world welterweight champion, made the announcement on his social media account in his second boxing match this year after beating Adrien Broner last January.

“The summer just got a little hotter!” the eight-division world boxing champion posted on his Twitter account along with a picture of the Pacquiao-Thurman poster.

MP Promotions’ Sean Gibbons also made the confirmation on the Filipino boxer’s next bout.

The 40-year-old Pacquiao will be entering the match with 61-7-2 win-loss-draw ring record, with 39 stoppage wins. He has won his last two matches, including against Lucas Matthysse and Broner.

The 30-year-old Thurman, on the other hand, has a perfect 29-0-0 boxing record, with 22 stoppage wins. The only dent on his record was a no contest with Francisco Garcia in 2009./PN 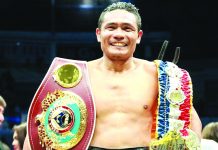