MANILA – A stretch of Boracay Island in Malay, Aklan yesterday was closed to the public for cleanup following reports that human waste had fouled its waters.

Tourism Secretary Bernadette Romulo-Puyat said the 48-to-72 hour closure was ordered by the Boracay Inter-Agency Task Force after a viral video of a foreign national allowing her child to defecate on the font beach of the world-famous island.

“Swimming was not allowed where the incident happened with markers 100 meters wide on the shoreline,” Puyat said. “Authorities now locating culprits and charges of violation of ordinance on environment will be filed.”

Last year, President Rodrigo Duterte shutdown Boracay to give way to the rehabilitation of its sewerage system and the demolition of illegal structures after he dubbed the place as a “cesspool.”/PN 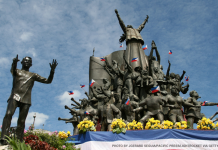