MANILA – If NLEX Road Warriors head coach Joseller ‘Yeng’ Guiao will only have things his way, he hopes to keep center John Paul Erram at his disposal ahead of the start of the 2020 PBA Philippine Cup on March 8.

However, the NLEX team management thought otherwise. They formalized their trade of Erram to sister team Talk N’ Text (TNT) Katropa via a complicated three-team deal that saw the Road Warriors receive injured forward Anthony Semerad and future PBA first round picks from the Blackwater Elite.
Blackwater, who acted as the conduit to make the sister-team trade possible, got Eduardo Daquioag and Marion Magat from the KaTropa, while TNT also acquired a future first round pick from the Elite.

“Wala ako masabi diyan kasi ako, ayoko i-trade si Poy. It’s not at my level,” Guiao said. “There are very few quality big men in the league and Poy is one of them. So I’m still in a quandary.”

The decision of the Road Warriors to trade the 6-foot-7 Erram was a stunner. He was playing with incredible statistics for the team last season by dropping averages of 11.7 points, 7.8 rebounds, and 2.1 blocks.
The Road Warriors gave tribute to the Gilas Pilipinas big man for a season of staying with the squad.

“Our organization recognizes Poy’s contributions towards our team’s growth in 2019,” the team said. “Beyond basketball, Poy has also lent his time and efforts to the advocacies and community-building activities of NLEX Corporation, from representing the team at the 2019 Panagbenga Festival, to lunches with NLEX employees.”

“We thank Poy for his hard work, sacrifice and dedication to our organization, and wish him the best as he continues his career in the PBA,” it added. “As an organization, we continue to look towards the future and place the NLEX Road Warriors in a position for success in the PBA.”/PN

Thoss, Simon to call it quits after PBA PH Cup 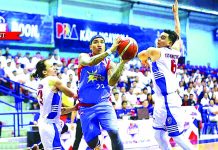 Poligrates ‘hungry’ to prove worth in MPBL