SAN JOSE, Antique – A 62-year-old seaman was killed after figuring in a road crash in Barangay Caridad, Hamtic, Antique.

He was identified as chief engineer Fernando Generosa, a police report showed.

According to police investigation, Generosa was driving a Ducati motorcycle when he accidentally hit a vehicle driven by Kevin Mark Checa with back rider Aiza Checa around 7:45 on Friday. Kevin Mark’s motorcycle swerved on a concrete road and both riders fell.

Generosa’s motorcycle meanwhile kept on speeding until it crashed into a tree and bumping another motorcycle driven by Gary Balbin.

Police said Kevin Mark and Aiza Checa, who sustained minor injuries, chose not to go to the hospital.

Generosa and Balbin were brought to the Angel Salazar Memorial General Hospital in San Jose where the attending physician declared Generosa “dead on arrival.”/PN 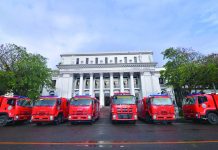