BACOLOD City – A Korean national and his friend emerged unscathed early yesterday morning after their driven vehicle crashed against the barriers of Halandumon Tower at the corner of Gonzaga and Gatuslao streets in this city.

According to police investigators, the vehicle was travelling on high speed in Gatuslao Road from 888 Chinatown to the said tower which is considered a one-way road.

The front portion of the vehicle was completely mangled, while the tower suffered extensive damage.

City Engineer Belly Aguillon meanwhile disclosed that the Korean – whose name was withheld by Panay News – signified his willingness to settle the damage he incurred to the said property of the city.

She added that she will refer this matter to the City Legal Office for proper disposition after they can get a copy of the police blotter.

Aguillon confirmed that the tower has not yet been turn-over by the contractor to the city after it was inaugurated on June last year, because the contractor is still fixing the electrical connection for the lights of the tower.

Project Engineer Loban Rafael Ceballos said the structure was based on the program of works and was not overpriced, retorting to the criticisms of netizens who described the allocated fund as “exorbitant.”

Ceballos noted the structure is made of steel materials, its column cover made of light wall concrete and the Light Emitting Diode lighting is programmable weather proof.

“The original plan of the height of the tower was 23 meters but because of insufficient funds it was only built in 14.9 meters,” he explained./PN 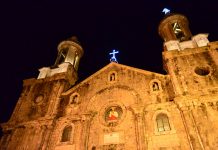