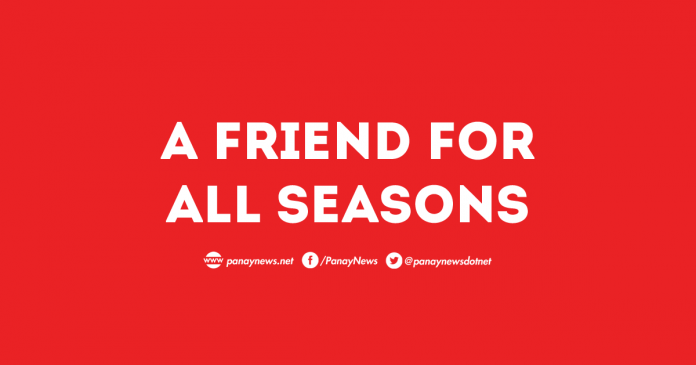 NOT A “fair-weather friend” but a “friend for all seasons”.

He never turned his back on a friend, said Sonza.

Sonza and Fajardo were already friends even before the birth of Panay News. The future newspaper publisher was then operating a bus transport business.

“Nakita ko how he struggled, tapos kon paano gin-nurture ang Panay News para magdaku to become one of the largest if not the largest regional newspaper,” said Sonza, himself a respected writer and lawyer.

He had several fond members with his friend.

Also a renowned local historian, Sonza said he was grateful that his friend Danny published his write ups or reported in Panay News his privilege speeches delivered in the Sangguniang Panlalawigan.

A year had passed since Fajardo crossed to the Great Beyond, Sonza said he still felt a big sense of loss. His good friend Danny was a pillar of Western Visayas press, he said.

“His ideas and words remain intact for seekers to find…The printed word is like an image carved in stone; it may not be erased in a thousand years,” according to Sonza in a privilege speech delivered in the Provincial Board days after his friend’s passing.

His friend was a prime exponent of a strong regional media industry committed to expand the frontiers of press freedom, he said.

Sonza added: “A keen analyst of politics and current events, Danny’s Reklamo Publiko was decidedly the most listened to public affairs program on radio and television in Iloilo. His incisive mind and quick wit had helped much in forming sound public opinion on countless concerns and issues of great import.”

“Danny G. Fajardo is gone, but his crusade and work go on,” said Sonza./PN