ROXAS CITY, Capiz – After nearly six years of hiding, a man who was charged with frustrated murder and rape, was arrested in Barangay Lawaan.

Police identified the suspect as 29-year-old Jacklin Elauria who was caught on the strength of an arrest warrant around 10:30 a.m. on Thursday.

Elauria allegedly raped and stabbed 21 times the victim whom police only identified as certain “Ivy” on Dec. 12, 2012 in Barangay Dinginan, Roxas City.

The suspect thought Ivy was dead when they left her around 12 midnight.

Elauria hid in Cuartero, Capiz and Barangay Camansi in Batan, Aklan after the incident.

He went home recently in Barangay Lawaan after his father suffered from a stroke.

Elauria was detained in the lockup facility of the Roxas City police station.

The court recommended a bail bond worth P200,000 for his temporary liberty./PN 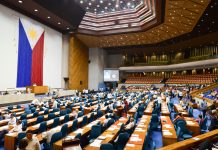