The 48-year-old resident Roque Bensurto was served a bench warrant around 11 a.m. on Dec. 3, a police report showed.

Bensurto was detained in the lockup facility of the Estancia municipal police station, facing charges for violation of Republic Act 9165, or the Comprehensive Dangerous Drugs Act of 2002.

The court recommended no bail bond for the suspect’s temporary liberty.(With RPIO/PN) 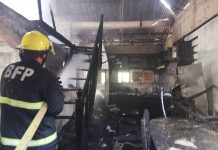