“May this occasion emphasize the importance of a free press and responsive local government units (LGUs) in maintaining the positive gains we have so far achieved as a nation,” Duterte said.

“I trust that the participants will embody excellence in their journalistic work as they underscore the role of the press in the service of the people,” he added.

Duterte also called on the media to personify truthfulness and objectivity in reporting “as we create a well-informed citizenry and strengthen our democratic institutions.”

“The synergy between media outlets and LGUs play a crucial role in nation-building. I thus welcome this timely congress that highlights their collaborative efforts to foster environmental care and bolster tourism in our communities,” he added.

The President has been invited to grace the event as guest of honor and speaker.

The annual event, which was mandated under Presidential Proclamation 1187, declaring December every year as the Month of the Community Press in the Service of the Nation, was organized by the Publishers Association of the Philippines Inc. (PAPI) for its effort to promote press freedom in the country.

Dayang enjoined student writers and bloggers to actively participate in the event as it included sessions that will enhance their writing skills and professionalism, generate goodwill with the working press, and widen their perspective and knowledge in their mandate.

With the theme “Media-Environment-Local Governance-Tourism-Science and Technology Partnership Towards Meaningful Growth,” the 24th National Press Congress will be conducted on Dec. 3-6 here, and will cap in Boracay Island, Malay, Aklan.(RadyoTodo/88.5FM/PN) 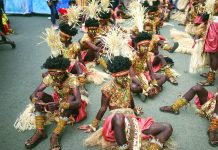 ‘Let’s make Dinagyang safe for everyone’