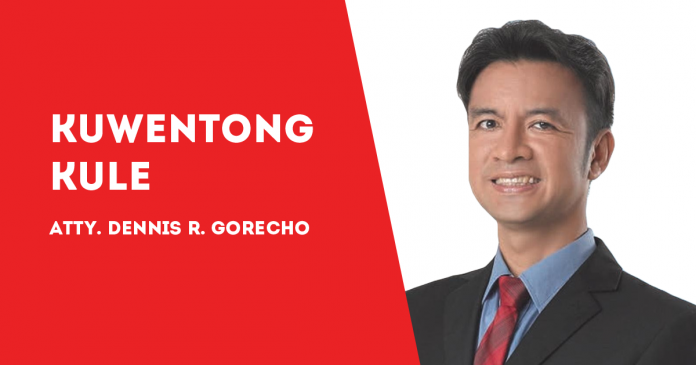 THERE are “shadows forcing Lolas into silence.”

“Lola”, the statue of Filipino comfort women and those forced into sexual violence by Japanese invasion and occupation troops during World War II, is missing.

Even if it is a reminder of a painful past, the “Lola” statue honors the memory, courage and resilience of these Filipino women.

On Sept. 18, 1992 Lola Rosa Henson decided to come out with her story and to tell everyone what happened to her with the hope that such an ordeal will never happen again to any woman. She was the first such Filipina to tell the world about this inhuman practice of the Japanese during the war.

The “Lola” statue represents Filipino women’s dignity and stands as “a reminder that wars of aggression must always be opposed, and that sexual slavery and violence should never happen again to any woman, anywhere at any time.”

Four months after its installation in December 2017, the statue was dismantled under cover of darkness on April 27, 2018 by the Department of Public Works and Highways, allegedly for a drainage improvement project; but it was seen as a submission to protests from Japan.

The Japanese Embassy lodged its official regret over the existence of the statue to Manila’s city hall, the National Historical Commission of the Philippines, and to the Department of Foreign Affairs.

Issues of historical revisionism and the government’s submission to Japanese policy were raised by concerned groups led by the Flowers-for-Lolas as they condemned the removal of the statue. President Duterte earlier remarked the state would not want to “antagonize” other countries.
Tulay Foundation again commissioned Roces to make the necessary repair, thus “Lola” was placed under his custody for safekeeping until the Flowers-for-Lolas finds her a “home”.

And her new home should have been the Redemptorist Church in Baclaran.

Despite the absence of the statue, a new metal historical marker dedicated to the Lolas was unveiled recently at the Baclaran church, over a year after a similar memorial was removed due apparently to Japanese pressure.

The broken mosaic tiles that adorn the pavement at the base of the “Lola” statue symbolize the broken lives of many lolas (grandmothers) but at the same time made whole and beautiful again because of their courage to share their experiences and tragedies, and the world’s efforts to recognize and honor them and their struggle for justice.

However, despite several follow-ups on the formal turnover of the “Lola” statue back to Tulay for its reinstallation initially on Aug. 18 then Aug. 25, 2019, Roces failed to do so. Until he recently told Tulay that the “Lola” statue was taken by unidentified men from his art studio in Cainta, Rizal.
There are “shadows forcing Lolas into silence.”

“Nothing happens in a vacuum, the missing ‘Lola’ is another event that highlights the comfort women issue,” said Teresita Ang See of Flowers-for-Lolas.

The statue of a young woman with fists resting on her lap has been removed from the Catholic-run Mary Mother of Mercy shelter for the elderly and the homeless in San Pedro, Laguna, only two days after its unveiling in January.

At present, a life-sized statues of two women still stand on the property owned by the family of women’s rights activist Nelia Sancho in Barangay Caticlan, Malay town, Aklan that greet Boracay-bound tourists.  “The ‘lolas’ are dying and we didn’t want the issue to die with them,” Sancho said, adding that the issue should be remembered and resolved, not buried and forgotten.
One of the surviving comfort women, Lola Narcisa Claveria, said “Ang giyera, walang pinipili. Ayaw naming maranasan ng bagong kabataan ang dinanas naming kalupitan.” She is living proof that the quest for justice remains alive today.

The 8 a.m. mass at the Baclaran church is offered for the elders. To many, the memories of World War II are dim, made dimmer by the passing on of the lolos and lolas who lived through the horrors of that war. Sadly, the “Lola” statue is now missing.

It has been more than 70 years since the war ended on Aug. 15, 1945 and yet the Japanese government refuses to recognize its official accountability to the victims of sex slavery.  Justice has not been given to women such as Rosa Henson. Their fight for unequivocal public apology, accurate historical inclusion, and just compensation continues up to this day.

“Kule” is the moniker of the Philippine Collegian, the official student publication of UP Diliman.

Comfort women and the insensitive red-tagging by the police force