The Golden lions captured the title after a 5-0 domination over Pixel Data of La Paz in the knockout championship match.

Jed Delariarte and David White fired two goals each, while Jan Bernard Delariarte added another one for the champions.

Ilonggo United F.C., on the other hand, ruled the Men’s Open Plate Category after a 2-1 victory against Boracay F.C. in the finals.

The two-day football competition, which is in line with the city’s Dinagyang Festival, was presented by Jaro F.C. in cooperation with the Iloilo City Government./PN 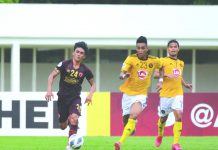