ILOILO – The provincial government’s proposed budget of P4.080 billion for 2020 may be approved before the Christmas break, according to the Committee on Appropriations of the Sangguniang Panlalawigan (SP).

Budget hearings have been completed, according to SP member Domingo Oso, chairperson of the Committee on Appropriations.

He said he may be able to present to the committee the budget report for deliberation, and by the first week of December such report may already be submitted to the plenary.

Budget hearings were faster than last year’s hearings for the 2019 budget, according to Oso, because capitol offices complied with the suggestion of the Commission on Audit to be specific with their proposed allocations.

Offices with the biggest budgets were the Governor’s Office, district hospitals and Hospital Management Office.

In the proposed P4.080-billion budget, the General Fund has an allocation of P3.029 billion while for Local Economic Enterprise (LEE), P1.060 billion.

The allocation is broken down into the following:

This will be sourced from collections and service incomes of 11 district hospitals and one provincial hospital, plus subsidy from the General Fund./PN 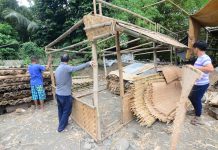