The team bagged the championship after an 84-76 victory over Uniwheels in the best-of-three titular showdown.

The both teams went toe to toe for most parts of the match before J. Cordon pulled away with less than two minutes left via timely conversions from Manday and Samones.

It was a sweet victory for J. Cordon after bowing to Uniwheels in Game 1 on Jan. 19 before bouncing back in the second game of the finals on Monday evening to force the winner-takes-all game.

Cris Loyola carried the fight for the Uniwheels with 30 points, while import Prince Eze was limited by J. Cordon’s defense./PN 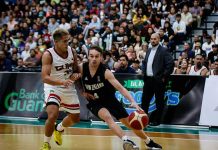