BORACAY – The Sangguniang Bayan (SB) of Malay town in Aklan wants to impose stiffer penalties for those who will be caught urinating or defecating in the beaches and public places of this world-famous island.

Personnel of the Malay Auxiliary Police patrolling the beach front caught the tourist for violating Section 4 of Municipal Ordinance No. 311 series of 2012, which prohibits urinating and defecating in public places, waterways and recreational areas in Boracay.

SB member Maylynn Aguirre-Graf also supported the proposed amendments, saying, the tour operators and tour guides should help inform or explain to their guests the existing environmental rules and laws in the island.

Graf said they will invite the Malay municipal police station, tour operators and guides, beach guards, enforcers and tour associations in a committee hearing next week to discuss the proposed amendments.

Violators under Municipal Ordinance 311 are penalized P1,000 or imprisonment of not less than 10 days and not more than 30 days at the discretion of the court for first offense while second offense and third and subsequent  offenses  are fined P1,500 and P2,500, respectively or with imprisonment  of one month up to six months.

Last month, a video went viral when a female tourist was seen washing the child’s behind in the sea while another tourist was spotted burying poop-filled diaper in the beach sand near Station 1.

Environment chief Roy Cimatu ordered local authorities to temporarily close down the area on Aug. 14 for cleanup. It was re-opened the next day after the water quality was proven safe for swimming.

This prompted the Boracay Inter-agency Task Force to consider installing portable public toilets along the beachfront of the popular beach destination. (With a report from Akean Forum/PN) 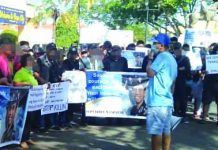