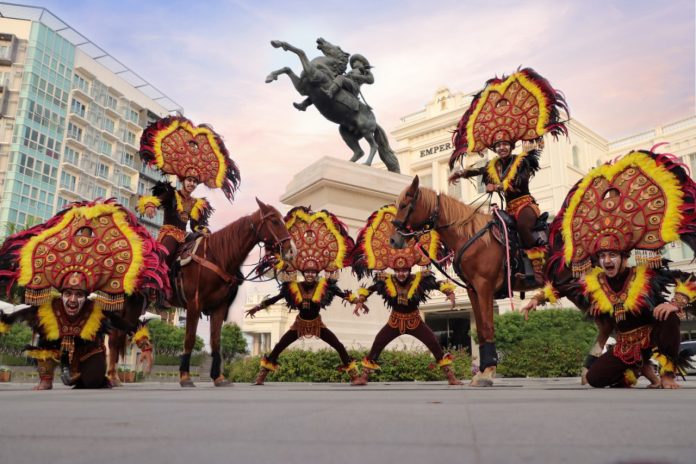 ALL roads lead to Megaworld Iloilo Business Park as the township hosts the grandest celebrations of this year’s much-anticipated Dinagyang Festival.

A total of 19 events are set to take place in different areas all over Iloilo Business Park.

The grand coronation night of the Miss Iloilo Dinagyang beauty pageant – one of the biggest highlights of the annual festival – will be held on Jan. 25, Friday, 6 p.m., in front of Casa de Emperador along Megaworld Boulevard.

“We welcome the ladies of Miss Iloilo Dinagyang here for the first time at Megaworld Iloilo Business Park and we are very excited to see who will be crowned as this year’s winner. We are proud to have the pageant here because it has always been among the biggest highlights of the Dinagyang Festival, and we look forward to hosting the Miss Iloilo Dinagyang here in our township for more years to come,” says Jennifer Palmares-Fong, vice president for sales and marketing, Iloilo Business Park.

Hosted at Megaworld Boulevard on Jan. 24, Thursday, 5 p.m., will be the Philippine Airlines (PAL) Dinagyang Party.

The same venue will also host the Viva Music Festival, an all-night dance and music party, from Jan. 25 to 27. Headlining the list of performers during the three-day event are iconic rock group Kamikazee, international DJ Jetfire, and celebrity love team Nadine Lustre and James Reid.

Come the 26th, the much-anticipated Dinagyang Lights Parade, which will feature more than 20 colorful floats, kicks off at 6PM, at Festive Walk Parade. This will be followed by the grand Dinagyang Fireworks Display at 9 p.m.

Huge celebrities and performances at IBP

Local rock group Urbandub is bringing their epic performance on Jan. 24, while local indie band Ransom Collective takes the stage on Jan. 25. Both performances will begin by 11 p.m.

Also taking part in this year’s festivities are some of the biggest Kapuso stars who will be bannering the GMA Kapuso Mall Show on Jan. 25, 6 p.m.

On Jan. 26, Saturday, Ilonggo bikers are set to gather together for the Honda Riders Meet Up with Orange and Lemons at 10 a.m. The Apartel – headlined by legendary Filipino music icon Ely Buendia – will surely be another highly anticipated act as they perform before the Dinagyang crowd on Jan. 26, while Up Dharma Down adds more to the revelry with a live performance on Jan. 27.

Tourists and locals alike can sample the best Ilonggo street delicacies at the strEAT Party Food Festival by the Iloilo Hotel Restaurants Association happening from Jan. 24 to 27, 4 p.m. onwards, at Festive Walk Parade.

Those visiting Festive Walk Mall from Jan. 25 to 27 can also catch the Dinagyang Warriors Parade featuring Tribu Bola-Bola at 4 p.m. and 7 p.m., respectively.

There will also be the Warriors Overload, a costume exhibit, sale and performance show, happening at Festive Walk Mall/Parade/Annex from January 25 to 27. Interactive Dinagyang Booths will also be hosted at the mall throughout these dates.

Last year, Megaworld Iloilo Business Park also hosted the Dinagyang Lights Parade, which gathered around 10,000 spectators, as well as the Grand Fireworks Display that was witnessed by more than 15,000 people. The Viva Music Festival, meanwhile, saw between 5,000 to 8,000 people joining the party every night. This year, Iloilo Business Park expects the crowd to get bigger since more events will be hosted in the township.

For more information about this year’s Dinagyang Festivities, visit Iloilo Business Park’s on Facebook at https://www.facebook.com/IBPofficial/PN