It was a huge victory in the Kabankalan, Negros Occidental-native Aldea’s young boxing career after losing in all of his previous out of the country matches, including against Russian Shavkatdzhon Rakhimov in 2016.

Aldea has been the busy fighter since the start of the match as he made use of his speed, reach and superior fighting skills to land repeatedly with right hooks and left straights on Alexeev.

Alexeev’s end came at the eighth round when he absorbed a full-power left uppercut from Aldea making the Russian landing hard face first on the canvas as the referee immediately halted the match.

Aldea admitted in a post-match interview that he did not expect to easily dominate and defeat Alexeev after seeing the latter’s fire power by watching clips of his previous matches.

With the victory, the 25-year-old Aldea improves his boxing record to 14-7-1 with eight stoppage wins, while Alexeev saw his slate dropped to 12-1-0 with four knockout victories./PN 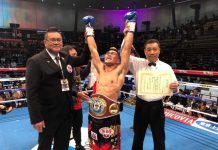 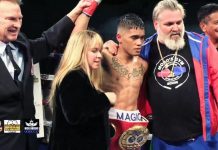