ILOILO City – The Department of Health (DOH) declared a dengue outbreak in Western Visayas except for Negros Occidental province which was placed on alert status only because, according to Health secretary Francisco Duque, its dengue cases were still “below epidemic threshold.”

DOH Region 6 director Marlyn Convocar said the region has been doing emergency purchases but the supply is still not enough.

Duque, who was in Manila, approved the region-wide dengue outbreak declaration during a videoconference with Iloilo City-based DOH Region 6 officials, with the exception of Negros Occidental where the “attack rate” (number of cases over the total population) remained low.

Dengue is a mosquito-borne viral infection causing a severe flu-like illness that could sometimes be fatal. Its carriers are day-biting mosquitoes (Aedes albpictus and Aedes egypti) that live and breed and clean, stagnant water.

These were the figures DOH-6 supplied to Duque:

* others (dengue acquired outside Region 6) – 22 cases

Duque welcomed the utilization of rural health units (RHUs) as hydration centers for dengue patients but urged DOH-6 to monitor their operation.

“Make sure you don’t overhydrate them (dengue patients) because this can lead to more problems,” said Duque.

Base on the DOH guidelines, RHUs can be utilized as hydration units for patients that don’t exhibit symptoms such as abdominal pain, persistent vomiting, signs of fluid accumulation, mucosal bleeding, lethargy, restlessness, liver enlargement, increase in hemotocrit or decreasing platelet count, and can tolerate adequate volumes of oral fluids.

The following are the medical procedures that the doctor or nurse should undertake in a hydration center:

* provision of anti-pyretic medicines (except aspirin) to control fever

Duque also reminded DOH-6 to continually coordinate with local government units for faster identification of the clustering of dengue cases.

“I would like you to continue monitoring the epidemic threshold in the region, in the different localities or provinces and municipalities and cities. This is important. This will help us address the problem,” added Duque.

According to the World Health Organization, individuals should suspect dengue when a high fever (40 degrees centigrade) is accompanied by two of the following symptoms: severe headache, pain behind the eyes, nausea / vomiting, swollen glands, muscle and joint pains, and rash.

For severe dengue, the warning signs to look out for are: severe abdominal pain, persistent vomiting, rapid breathing, bleeding gums, blood in vomit, fatigue, and restlessness.

Duque called for a heightened 4S campaign – “search and destroy” mosquito breeding sites; employ “self-protection measures” such as wearing trousers and long-sleeved shirts, and daily use of mosquito repellant; “seek early consultation,”; and “support fogging/spraying” only in hotspot areas where increase in cases is registered for two consecutive weeks to prevent an outbreak.

DOH data showed Western Visayas having the most number of recorded dengue cases from Jan. 1 to June 29 – 13,164 cases with 78 deaths. Trailing it were the following regions:

The total Philippine dengue cases so far this year reached 106,630 with the death toll at 456.

Following the declaration of a region-wide outbreak, Duque also gave his go signal to delay the implementation of the school-based immunization (SBI) by two months to allow health workers to focus their attention on dengue. The SBI is scheduled from July to September.

“Instead of September, we will have to wait until end of November to be able to achieve our target of 95 percent herd immunity in Region 6,” Duque said.

Moreover, a moratorium on the conduct of trainings will be implemented to allow DOH to focus on “reversing the epidemic and alert thresholds or trends in your region,” he said.

Personnel of RHUs will also be deployed at hospitals to augment the latter’s workforce. They will include 24 medical technologists, 16 doctors, and 189 nurses.

Duque reminded the regional office, however, to make sure that there are enough personnel left in RHUs. (With a report from the Philippine News Agency/PN) 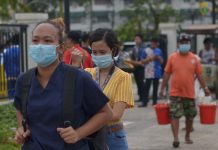 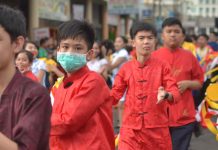