MANILA – Negrense Juvic Pagunsan turned the final round of the ICTSI Riviera Classic into a victory walk for a record fourth straight championship in the Philippine Golf Tour in Silang, Cavite.

Pagunsan, a native of Murcia, Negros Occidental, closed out the competition with a 70 for a whopping eight-shot victory over Tony Lascuña in a rain-hit week that ended with clear skies.

Pagunsan drilled in a side-hiller for birdie from 10 feet on the 18th and pumped his fist to close out with a 36-34 for a seven-under 277 total and another P450,000 purse in his final PGT tournament.

“I’m very happy to win four straight (on the PGT) championships. It seems that as I grow older, I am able to achieve more goals,” said Pagunsan, who also won crowns in Negros Occidental and Iloilo.

He added: “For now this will be my last PGT tournament. I am heading back to international tournaments, especially in Japan. But if my schedule permits, I might be able to join in other local events.” Meanwhile, Lascuña secured runner-up honors at 285 despite bogeys in the last two holes for a 71 while reigning Philippine Open titlist Clyde Mondilla birdied four of the last nine to save a 69 and claim third place at 286.

Rupert Zaragosa posted his best finish in a rookie season marred by missed cut stints, closing out with a 69 for solo fourth at 287 while Dutch Guido Van der Valk, who took the other Visayan leg in Cebu, wound up fifth with a 288 after a 72./PN 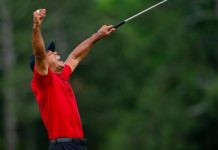 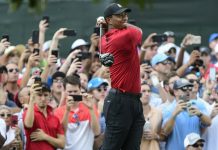 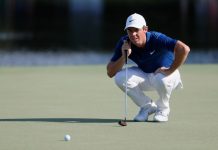 Rory McIlroy in the hunt at Tour Championship