TORONTO – The Toronto Raptors showed they belong in the NBA Finals, frustrating the Golden State Warriors, 118-109, to draw first blood in the title series at the Scotiabank Arena in Toronto.

Pascal Siakam shone brightest, scattering a playoff career-high 32 points on 14-of-17 shooting, eight rebounds, five assists, two blocks, and one steal in 40 minutes to lead the Raptors to the Game 1 victory yesterday.

Kawhi Leonard made just five of his 14 attempts but still finished with 23 points, on top of eight rebounds, five assists, and one steal in 43 minutes.

Game 2 of the best-of-seven series is on Monday also in Toronto.

Steph Curry led the Warriors with 32 points, five boards, five assists, and one steal, while Draymond Green registered a triple-double of 10 points, 10 rebounds, and 10 assists, but committed six turnovers.

Demarcus Cousins suited up for the Warriors, but played just eight minutes and scored three points.

After nine days off following their Western Conference finals win over the Portland Trail Blazers, there were concerns that the Golden State Warriors would be rusty for the NBA Finals.

Those worries were warranted.

Opening on the road for the first time in their stretch of five straight Finals appearances, the Warriors took the floor at a raucous Scotiabank arena without Kevin Durant. They looked off from the opening quarter.

An active Toronto defense slowed Golden State’s transition and forced the Warriors into 10 first half turnovers and 36.6 percent shooting from the field in opening a 59-49 lead.

A 10-point lead against these Warriors is far from comforting as so many teams in their path have learned the hard way. But the second-half run that Golden State fans have come to expect never arrived as Toronto struck back against the narrative that they were outmatched in this series, Durant or no Durant.

Golden State came close to start the third quarter, cutting a 10-point deficit to 90-87 behind its bench as Kawhi Leonard rested. But the Raptors struck back with two unanswered buckets, forcing the Warriors into a timeout. Toronto maintained control of the rest of the game.

The Raptors secured the win with balance on offense and an unforgiving effort on the defensive end. And they won without a dominant performance from Kawhi Leonard, who struggled from the field and took a back seat to Siakam, who led the way with 32 points, 8 rebounds and 5 assists.

Siakam took over in the third quarter, scoring 14 points in the stanza during a run that saw him hit 11 consecutive field goals. He finished 14-of-17 from the field while adding a steal and a pair of blocks on the defensive end.

“It’s amazing man,” Siakam told ESPN of drawing energy from the Toronto crowd. “The best fans in the NBA. Just like this moment, we want to continue to do what we do, and hopefully we’ll get it done.”

“We’ve got to stay solid. It’s a great team we’re playing against,” Siakam continued when asked about moving forward against the Warriors. “It’s gonna be tough. We’ve just got to be ourselves. They’re gonna make adjustments. We’ve got to be ready for that.”

Leonard picked up his game after an eight-point first half to finish with 23 points, 8 rebounds and 5 assists. But he struggled from the field, hitting 5-of-14 shots and looked off his game at times, failing to score his second field goal until the final two minutes of the first half.

But Toronto didn’t need Leonard to be at his best on offense, as five Raptors players scored in double figures.

Marc Gasol tallied 20 points and 7 rebounds in his NBA Finals debut. Finals veteran Danny Green chipped in 11 points while hitting 3-of-7 3 pointers. And Fred VanVleet sparked the Raptors in a key second-quarter run, finishing with 15 points on 5-of-8 shooting from the field.

Kyle Lowry only scored 7 points, but added 9 assists and 6 rebounds and was a nuisance on defense.

Toronto finished the game hitting 50.6 percent of its field goals and connecting on 13-of-33 (39.4 percent) 3-point attempts.

The Warriors team that cruised in the latter stages of the series against the Houston Rockets and swept the Portland Trail Blazers with Kevin Durant sidelined was nowhere to be found on Thursday.

Stephen Curry was outstanding, posting 34 points while hitting 4-of-9 3 pointers and all 14 of his free throws. Klay Thompson was solid with 21 points on 8-of-17 shooting from the field.

As far as Game 1s go, this was as close to a must-win as it gets for Toronto. There’s no sign of when or if Durant will return, but losing at home against a short-handed team of Golden State’s caliber would not have boded well for Toronto’s chances in the series.

The Raptors answered the bell in convincing fashion. The heavily favored Warriors have been put on notice. (Yahoo Sports, Spin.ph) 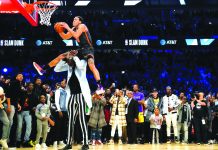 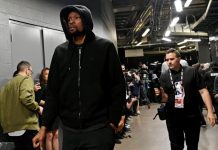