Ejiya Laure led the way with 25 points, including 21 attacks, while Cherry Rondina, Kecelyn Galdonez and Caitlyn Viray added 17, 11 and 10 markers, respectively, for the Golden Tigresses.

It was the Golden Tigresses’ first trip to the UAAP women’s volleyball finals after eight years and they will face the winner of Ateneo de Manila University Lady Eagles and Far Eastern University Lady Tamaraws series.

Trailing 4-7 early in the first set, the Golden Tigresses went on a huge rally to take a 22-16 edge on the way for a 1-0 set lead. DLSU again got the lead early in the second set but errors from them allowed UST to take the advantage and a 2-0 set edge.

The Golden Tigresses were aiming for the kill in the third set with a 15-11 lead but a huge run by the Lady Spikers kept them alive. DLSU showed some nerves of steel down the stretch in the fourth frame to stretch the match to a decider.

In the fifth set, both teams exchanged leads before the Golden Tigresses surged to a 10-5 edge. The Lady Spikers rallied to within 10-11 but Alina Bicar, Rondina and Laure came up with clutch hits to barge to the championship round.

Rookie Jolina dela Cruz top-scored with 12 points, while Desiree Cheng and Aduke Ogunsanya contributed 10 markers each for the Lady Spikers, which will not be in the finals for the first time in 10 years./PN 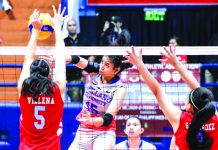 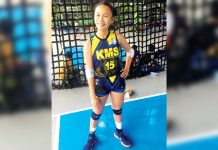