MANILA – University of Santo Tomas Golden Tigresses’ Cherry Rondina and Ejiya Laure were leading the way in the Most Valuable Player race after the first round of UAAP Season 81 women’s volleyball.

Rondina, who is on her final year with the Tigresses, tallied league-best 17.4 points average in seven matches, second-best 34.26 percent success rate, while at No. 6 in digs with 3.70 excellent digs per set.

Laure, on the other hand, leads all rookies and ranked No. 2 in the MVP race with a second-highest scoring average at 16.7 points and a league-best 37.88 percent success rate.

Rondina, Robles and Laure, meanwhile, emerged as the top three outside hitters with Lady Maroons’ Maria Lina Molde and University of the East Lady Warriors’ Judith Abil at fourth and fifth. 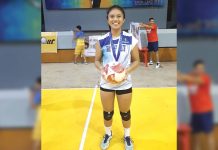