She has decided to be the running mate of gubernatorial candidate Cong. Fernejel Biron of the Nacionalista Party (NP), announced her father, Mayor Oscar Garin of Guimbal, last night.

In July, the vice governor said she was not seeking reelection and would instead run for congresswoman of the party-list AAMBIS-Owa representing marginalized farmers although she admitted that as a first-term vice governor, she wished to serve the province longer.

“I like serving Iloilo. It’s a lively province and I can really interact with my constituents,” she said.

AAMBIS-Owa’s current representative in the Lower House is the vice governor’s elder sister Sharon who is on her third term and is thus barred by law from seeking a fourth consecutive term.

Mayor Garin also revealed last night the Garin family planned to move to the NP from the Partido Demokratiko Pilipino – Lakas ng Bayan and that he was leaving it to son Cong. Richard Garin (1st District) to decide whether to seek reelection or not.

The Garin patriarch, however, did not discount the possibility that Richard’s wife, former Health secretary Janette, would run for congresswoman.

As for him and wife Ninfa, the mayor of San Joaquin, Mayor Garin said both of them would be seeking reelection./PN 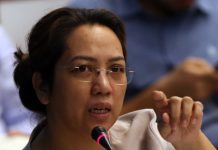