BACOLOD City – The man who allegedly stabbed his wife to death surrendered to the municipal police station of Isabela, Negros Occidental.

The 26-year-old Arnaiz Arevalo of Hacienda Alicante, Barangay Buhangin, Isabela turned himself in on Tuesday morning. He was accompanied by his uncle who was not identified, police said.

Arevalo is the suspect in killing his 26-year-old wife Angela around 2:20 p.m. on Sunday.

Angela died of multiple stab wounds on the body, a police report showed.

Arevalo said he hid in the sugar plantation but was advised by his relatives to surrender.

Angela had worked as an overseas Filipino worker in Dubai for two years. On Sunday, she went home to take her two children from Arevalo.

But they had a heated argument, which resulted in the stabbing.

Angela allegedly has an illicit affair with a man from Mandaluyong City, who she brought with her in Isabela, according to investigators.

Arevalo was detained in the lockup facility of the municipal police station. A parricide charge may be filed against him, police said./PN 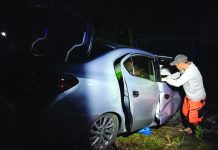