NEGRENSE boxers Roldan Aldea and Romel Oliveros were not fortunate in their overseas bouts following their heartbreaking defeats to Japanese foes on Saturday evening at the Korakuen Hall in Tokyo, Japan.

Aldea tried his best to keep in step with his experienced opponent but Ogawa pounded on the loopholes on the defense of the Negrense fighter for a one-sided verdict from the judges.

The 24-year-old Aldea dropped his record to 12-7-1 win-loss-draw, including six stoppage wins. Ogawa, meanwhile, improved his slate to 23-1-0 card, with 17 knockout wins.

Eto has been dominant since the opening bell as he scored several knockdowns on Oliveros before the referee decided to step in midway in the fourth round.

With the loss, the 23-year-old Oliveros saw his boxing slate slid down to 9-5-1 win-loss-draw, with four knockout wins, while the 30-year-old Eto increased his record to 24-4-1 with 19 stoppage wins./PN 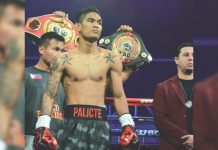