The suspect was identified as the second cousin of the victim’s stepfather – whose name was withheld to protect the victim’s identity.

According to police investigation, the victim, a Grade 8 student, was on her way to school when she was dragged to a sugarcane plantation in the village and raped. It was around 6 a.m.

Police believed that the suspect used a stone to hit the victim.

A passerby discovered the girl’s body and rushed her to the Corazon Locsin Montelibano Memorial Regional Hospital in this city.

As of this writing, it was not yet confirmed if she was raped pending the result of a medical examination.

Officers of the Cadiz City police station conducted a manhunt operation against the suspect, who fled after the incident./PN 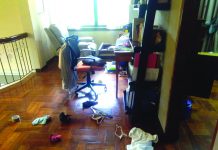