The Green Archers were the aggressor late in the last 10 minutes of the match, as rookie John Rhey Lagura had several scoring chances to put his side ahead but fell short.

Zubiri then converted his first-ever UAAP goal – and De La Salle’s biggest of the season – in stoppage time that was enough to collect 25 points and clinch the last semifinals seat.

In the other match, Kyle Magdato fired two goals while Dane Saavedra also entered the scoresheet as defending champion University of the Philippines Fighting Maroons fashioned out a 3-0 win over University of the East Red Warriors.

The Fighting Maroons finished second in the table with 26 points and will face No. 3 Archers in the knockout semifinals on Thursday at the Rizal Memorial Stadium.

The loss dropped the Tamaraws to fourth spot at 24 points.  FEU will take on elimination round topnotcher Ateneo de Manila University Blue Eagles in the other Final Four pairing.

In women’s action over at the Circulo Verde pitch, University of the Philippines Lady Maroons kept its Finals hopes alive following a 1-0 victory over University of Santo Tomas Golden Tigresses.

Sofia Dungca struck in the 47th minute which turned out to be the Lady Maroons’ winning moment and improve to eight points. The victory also handed the De La Salle University Lady Archers the first finals seat./PN 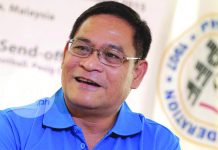 Selected PFL matches to be aired on TV 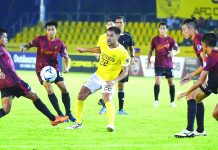