BACOLOD City – President Rodrigo Duterte’s directive to halt rice importation amid falling palay prices is “good” for the local farmers in Negros Occidental who suffered from the rice tarrification law, according to Sen. Cynthia Villar.

Villar made this remark after President Duterte ordered the Department of Agriculture to suspend the importation of rice.

“The President ordered the halt for rice imports because it is currently harvest season for local rice,” Villar said. She was here yesterday as the guest of honor during the 14th Negros Island Organic Farmers’ Festival at the Provincial Capitol.

Villar added that the national government will delay the importation of rice until the end of the harvest season to support local farmers to sell their crops.

“The Philippines always imports rice because the domestic production is not enough,” the senator said.

Villar, who authored the rice tarrification law, clarified that the liberalization of the rice industry is covered by the agreements of the General Agreements on Tariffs and Trade- World Trade Organization signed in 1995 and expired on 2017.

Duterte has ordered Agriculture Secretary William Dar to suspend the importation of rice in a press conference late Tuesday night, saying the move was needed to avoid “riots” brought about by hunger and a lack of food.

He claimed that among the reasons for the lack of rice was local producers’ failure to accurately predict how much they produce citing factors such as climate change, which affected local farmers’ projected output come harvest time.

The President said he opted to stop the importation of rice as he could not stop rice tariffication, which was needed to “erase corruption.”

Duterte did not say for how long the order would be in place, claiming it was needed to ensure farmers earned from their efforts./PN 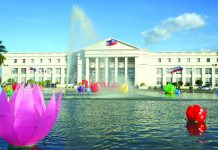