GUIMARAS – The grounding of motorboats plying the Iloilo-Guimaras route has made it difficult for people here to go to Iloilo City to work, study or do business. It has also become harder to transport goods from this island province to the city and vice versa, according to Gov. Samuel Gumarin.

“Our economy is agri-tourism propelled. The grounding of the motorboats is adversely affecting it. It has displaced Guimarasnons working in the motorboat sector. Please help us,” said Gumarin.

Aside from the four additional vessels, MARINA coordinated with the Philippine Navy through the Armed Forces of the Philippines’ Central Command to deploy BRP Ivatan yesterday to Guimaras and help ferry passengers.

Gumarin said, “70 to 80 percent” of Guimaras’ needs are sourced from Iloilo.

It felt like Guimaras had become isolated, he lamented.

Past noon on Saturday, M/B Chi Chi and M/B Keshia, both bound for Guimaras from Iloilo City, were hit by a squall or a sudden gust of violent winds and rain. They capsized.

The three boats had a total of 83 passengers and 13 crewmen.

In a directive pursuant to Section 12 of Presidential Decree 474 issued on Aug. 5, two roll-on, roll-off (ro-ro) vessels from Montenegro Shipping Lines Inc. and Tri-Star Megalink Corp., and two fastcraft vessels from Ocean Fast Ferries, Inc. and 2GO Group, Inc. were ordered b MARINA to augment the services in the Iloilo-Guimaras route.

Earlier, FF Cruz Shipping Corp. was instructed to increase its trips from one to two ro-ro round trips per hour in the said route.

Gumarin appealed for livelihood assistance; some 10 percent of the around 40,000 households in the island is suffering, he said.

He considered Saturday’s tragedy as worse than the oil spill that hit Guimaras’ waters in 2006 in terms of its effects on the island’s economy.

Gumarin thanked Department of Transportation secretary Arturo Tugade and the Office of Civil Defense for the additional ro-ro trips from Guimaras to Iloilo and vice versa, and also the Philippine Navy for making available BRP Ivatan./PN 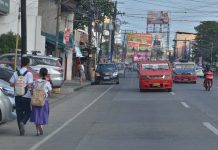