According to police investigation, Mederable and Lañada were on their way to the latter’s boardinghouse when a heated argument ensued between them around 8:25 a.m. on Jan. 22.  This prompted Mederable to stab Lañada. But it was not immediately established what triggered the altercation.

Responding police officers found Lañada’s body near his boardinghouse with a knife still stuck on his chest. They conducted a follow-up operation which led to the arrest of Mederable.

The suspect was now detained in the lockup cell of the Santa Barbara police station, facing charges./PN 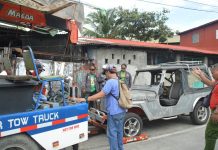