Armed with a search warrant, the police raided the house of 46-year-old Debbie Orquia around 5:45 a.m. on Friday, a police report showed.

Suspected shabu weighing about 10 grams valued around P150,000 was recovered from the house, the report added.

The suspect was detained in the lockup cell of the Silay City police station, facing charges for violation of Republic Act 9165, or the Comprehensive Dangerous Drugs Act of 2002./PN 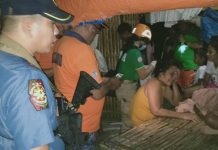