Netizens could not help but speculate after the former actress recently changed her Instagram bio to “ghost writer,” alluding to an earlier statement by La Greta about her niece, Marjorie’s daughter Julia Barretto.

On Tuesday, the “Between Maybes” star courted headlines after finally breaking her silence on the controversy tagging her as the “third party” in Bea Alonzo and Gerald Anderson’s breakup.

In a seven-page message she posted on her Instagram page, Julia accused the “Eerie” star of being “sly” and encouraging a “culture of hate” by deliberately liking social media posts suggesting an affair between her and Gerald.

“You are a woman of great influence and following. You could have used that power to promote strength and grace in women, but instead, you’ve used that to promote social media irresponsibility. That is downright bullying,” she said.

“You can play victim all you want, but I refuse to be your victim,” she added.

At the time, Gretchen reaffirmed her support for Bea by stating in a comment that she’s with “team Bea.” She also accused Julia of hiring a ghost writer, citing, “The fact that they hired a ghost writer for this post is hilarious and makes her sound desperate to salvage whatever is left.”

Prior to this, she and Claudine Barretto, who are known to be estranged from Julia’s mother, extended their support for Bea by sending her flowers in the wake of the controversy.

Meanwhile, Gretchen, as what appears to be a clap back to Marjorie, pulled the same stunt by changing her Instagram bio to “ghost buster” on Sunday. (Push) 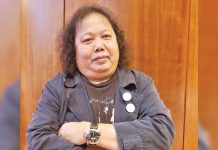