TALISAY CITY, Negros Occidental – Team Silay B and Team Gandang Laban emerged as champions in the women’s and men’s category of the NVF Beach Volleyball For a Cause at the Verdana Beach Court Plantazionne here.

San Carlos A of Stephen Enee and Kent Contiga finished as second runner up while Nicole John Poja and Jeffe Gallego of Cadiz team ended up as the third runner up. 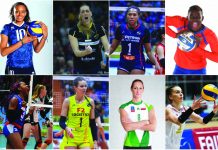